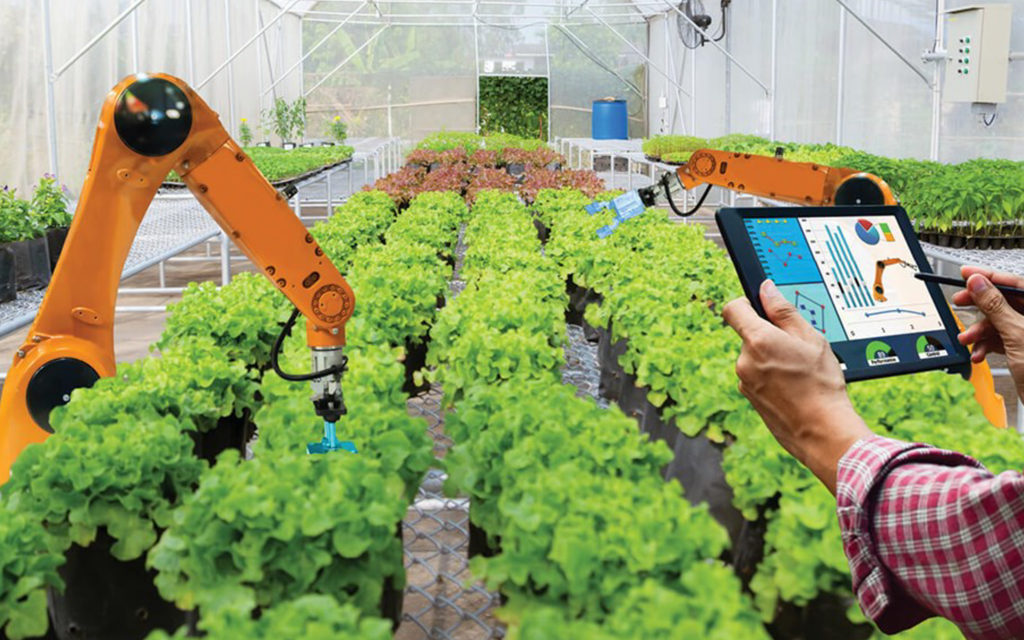 As the role of controlled environment growing increases in agriculture, so does the opportunity for artificial intelligence. But can AI replace the human touch? Kent Gruetzmacher investigates.

As both a process and vocation, controlled environment agriculture (CEA) is intimately entwined with technology. As CEA gets increasingly sophisticated through technological advancements, how these developments will affect horticultural processes and, in turn, world food supplies, remains largely unknown. At the forefront of new frontiers in CEA technology lies artificial intelligence (AI), which can potentially forever change the way humankind procures fresh produce, largely by replacing human labor with mechanized production.

We live in a world increasingly dependent upon, and defined by, technology. This notion rings true in almost every facet of day-to-day life in the 21st century, including communication, entertainment, and work. Similarly, for those living in the Western world, this same technology contributes to meeting our general human needs, as food is readily available for most people at grocery stores and beyond. Yet, our current food subsistence patterns are far from infallible and the technologies that make commercial agriculture possible are falling short on several fronts.

These shortcomings are evident in pesticide- and preservative-laden food sources as well as hungry human populations in less-fortunate regions of the globe.

Over the last few decades, CEA production has grown leaps and bounds in its scale and capabilities. Many believe CEA practices such as urban agriculture and vertical farming will eventually help resolve global food crises. This positive outlook is largely because of technological advancements in “smart” environmental controls and LED lighting, which have made CEA production viable, as well as profitable, on a commercial scale for the first time.

Sophisticated irrigation systems have also drastically reduced the amount of human labor required in propagating crops. For many CEA advocates and technology authorities, AI is the next phase in streamlining and sophisticating agricultural procedure as well as global subsistence patterns.

Why Artificial Intelligence?
There are several reasons why AI has so much potential in the world of CEA. These reasons mainly have to do with notions of horticultural processes and labor efficiency. Today, automation is already an essential element in most CEA growing, and its benefits are related to both consistency and efficiency in operations. For example, smart controllers take much of the guesswork out of troubleshooting environmental issues, while fertigation systems accomplish irrigation in a controlled and effective fashion.

Artificial intelligence has the capabilities to take these advancements even further.

Technology authorities postulate that AI can potentially circumvent human interaction with horticultural processes and garden maintenance almost in their entirety. According to agfundernews.com: “Hypothetically, it is possible for machines to learn to solve any problem on Earth relating to the physical interaction of all things within a defined or contained environment… by using artificial intelligence and machine learning.” The important take away here is the idea AI systems can learn as well as make choices based on the objective constraints that dictate rational human decision making.

Concerning both production and labor, this avant garde theory pushes notions of CEA automation to their absolute extremes. This AI learning concept postulates robots would be at the controls of environmental and irrigation systems that currently require human intervention in the way of fine tuning and decision making. Also, AI could circumvent human error from these processes by removing the human labor needed to grow CEA crops.

While these ultramodern appraisals of AI and CEA cultivation can seem somewhat alarming, many see a real potential benefit in the technology, namely because humans are, well, undependable. The industry is traditionally plagued by labor shortages in jobs that aren’t very attractive to even the most entry-level employees. Many companies, in CEA and beyond, understand the struggles of finding dependable help for their businesses, with tech retail giant Amazon currently employing more than 40,000 robots in its warehouse operations.

In agriculture, there are several robots being developed that can handle more rudimentary CEA garden chores such as leaf pruning. When it comes to AI learning applications and high-level jobs in CEA, it’s worth noting even the most rudimentary human error in fertilization or irrigation can have devastating effects on crops. Large vertical farming companies are aware of this and are currently implementing AI help in certain facets of their operations.

Sensors and Data Analytics
Artificial intelligence applications in CEA are entirely data driven — machines both gather, as well as use, this information as the basis of machine learning. This sort of remote sensing, data compiling technology is already widely popular in more advanced CEA operations, especially regarding soil and air sensors. These technological advancements are used to measure moisture levels in grow mediums, and temperature and humidity levels in the air, and give cultivators real-time updates on the working analytics of their operations.

Commercial agriculture operations are taking notions of remote sensors and data analytics to the extreme by way of drone sensing. Some commercial farms use drones to fly over fields of crops and take precise readings of growth patterns and environmental conditions. This data informs growers, in real time, what sort of elements their garden is lacking or burdened with — allowing them to make proactive decisions in counteracting potential problems.

For the time being, drone technology in commercial agriculture is still being utilized to inform rational decision-making in the human mind — but many feel these processes would be integral with informing data matrices in the “minds” of AI machines.

Artificial Intelligence and Machine Learning
Potential advances, as well as drawbacks, of AI applications for CEA can be drawn from current mainstream research — such as with IBM — into the technology’s capabilities regarding commercial agriculture.

agfundernews.com reports: “Interviews with some of the IBM project team members … revealed that the team believed it was entirely possible to ‘algorithm’ agriculture, meaning that algorithms could solve any problem in the world.”

While IBM’s claims are grandiose and positive in nature, they are not entirely unreasonable. Major computer tech companies such as Google and Pandora already utilize algorithms to isolate relevant data, make decisions, and cater to human needs. However, all these algorithmic applications depend upon objectively derived, predictable points of data in informing the machine learning process.
When it comes to creating algorithms for agriculture, researchers have been running into countless problems stemming from the unpredictability of the natural world. There are countless variables contributing to weather patterns around the globe; the nuances of these factors are far beyond the scope of human understanding. This notion is relevant because humankind cannot program machines to learn about environmental systems that we don’t yet understand, and AI cannot make the critical step in accounting for anomalous factors in weather or crop production. Therefore, our technology is only as strong as the data we supply it with via our own knowledge.

While issues with environmental predictability that plague AI applications in traditional agriculture may not seem to affect CEA production as intensely, there are still factors that make AI fall short in controlling CEA growing in its entirety. For instance, many greenhouse gardens are still largely at the mercy of Mother Nature and present challenges with anomalous weather patterns.
Similarly, indoor growing operations experience problems with such irregularities as equipment failure and power outages, which only human intervention can fix.

Controlled environment agriculture crop production is only as strong as the equipment and human labor supporting it, so the balance between these two continues to shift under the pressures of new advancements with technology such as AI. This notion presents an interesting crux in modern cultivation processes, as automation can provide a more efficient platform for consistency than with human labor. However, machines cannot account for the rhythms of the natural world or other operational variances.

Many accomplished horticulturists understand the intuitive touch it takes to produce exceptional crops — this intuition comes as a feeling rather than as a form of objective knowledge or data. AI and other technological advancements in CEA growing have their place in today’s horticultural processes, yet cannot match the capacity for creativity explicit in the human mind.