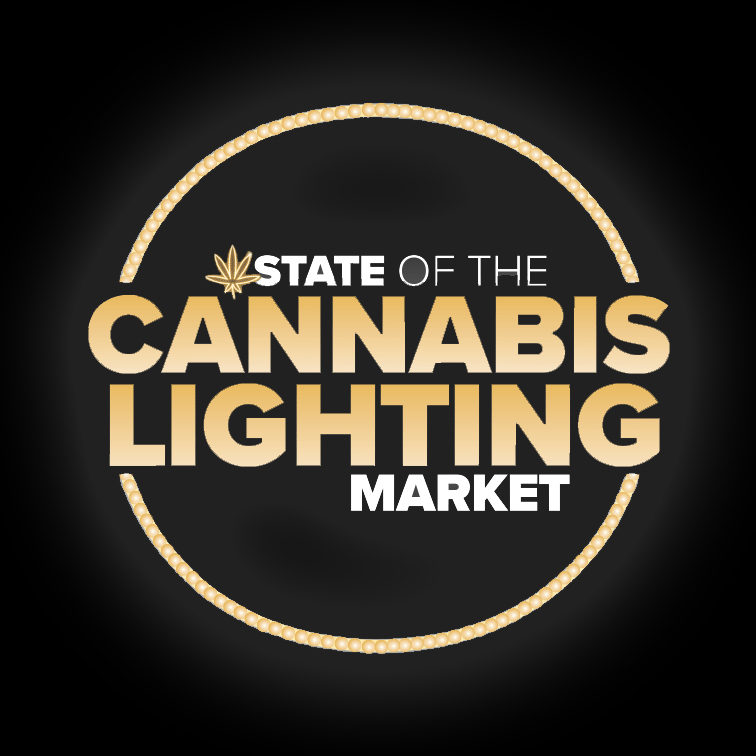 While cultivators’ lighting preferences still vary, however, this year’s research showed an increase in the number of cultivators using light emitting diodes, a newer lighting technology more commonly referred to as LEDs: It is the only lighting technology to see double-digit increases during all growth stages between 2016 and 2018.

Growth Stage: Propagation
Nearly half (47%) of this year’s research participants said they use LEDs during the propagation period, compared to 21% in 2016. This represents a 26 percentage-point increase over two years. However, T5 (high output/HO) lights (or other HO fluorescents) are still used by a slim majority of growers (51%), compared with 65% in 2016 and 63% in 2017.

*Total may exceed 100% because respondents could select all that apply. **2017 results are based on the 294 research participants who grow only indoor and/or in greenhouses using supplemental lighting. 2016 results are based on 117 research participants who grow in indoor and/or greenhouses (with or without supplemental lighting) and/or outdoors.

Growth Stage: Vegetation
In vegetation, LED use was the most common among lighting types among research participants: 46% of growers reported using LEDs during this growth stage, climbing from 17% in 2016.

Nearly a third (32%) said they use quartz and/or ceramic metal halide (MH) lights during this growth stage—a drop of 11 percentage points from 2017. (CBT did not calculate net MH responses in 2016.)

T5s were the third-most popular lighting type—28% of respondents reported using them in this year’s study (down from 37% in 2016).

High-pressure sodium (HPS) lights also experienced a drop among growers during vegetation: a quarter (25%) of research participants said they use HPS lights in 2018 versus 31% in 2016.

Growth Stage: Flower
In flower, the research found that HPS remains the most-used lighting type in cannabis cultivation: 51% of growers said they use them, a 6 percentage-point lead over the next closest fixture, LED; 45% of growers in 2018 said they use LEDs versus 15% in 2016, a 30 percentage point increase during that period.

MH lights are less popular during flower than during vegetation: 11% of growers said they use either MH quartz or MH ceramic lights during this period (down 6 percentage points from 17% in 2017). (CBT did not calculate net MH responses in 2016.) 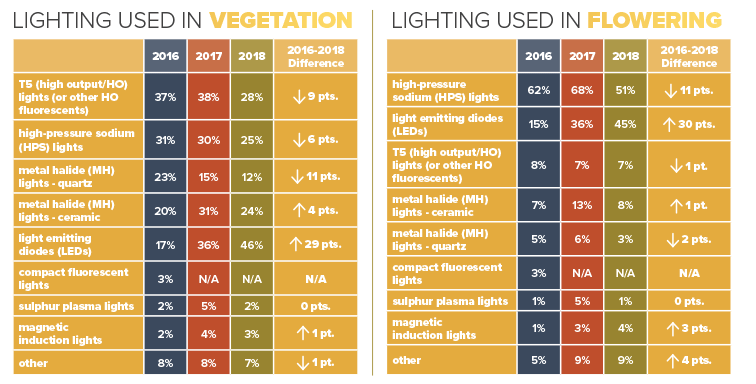 The LED Factor
Despite the data showing LED rise across the board, LEDs are still too expensive for some: 46% of 2018 respondents who do not use LEDs for the cannabis flowering stage (the only stage for which study participants were asked this question) and do not plan to within the next 12 months (or are unsure) cited initial cost as the main factor preventing them from converting (compared to 59% in 2017, no data for 2016).