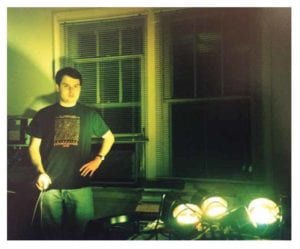 The show started at twilight. On a balmy evening last February outside Tasmania’s Museum of Old and New Art I sat spellbound on a granite bench, gazing up at a large white fibreglass canopy that floated several metres above my head. Light projected onto it began gradually morphing from one gorgeous hue to another. Lilac deepened to purple, then shifted to burnt orange, to chartreuse green, and on it went. Meanwhile, through a rectangular aperture cut in the middle of the canopy, the darkening sky seemed mysteriously to lose depth, becoming a flat plane of color that looked as if it had been painted on the ceiling. The interplay between artificial and natural light was hallucinatory: as the hue of the former changed, so apparently did that of the latter. In a silence punctured only by the raucous laughing of a pair of kookaburras the program shimmered on, ending after perhaps an hour, when the sky had become pitch black. A truly magical experience, one that I shall remember as long as I live.

What I had witnessed was Amarna, one of the latest [2015] in a series of “skyscapes” created by the American light artist James Turrell. The first skyscape, a small white-walled room at the Villa Panza in Lombardy, dates back to 1974. The curator Alana Heiss made a pilgrimage to Italy to view it. She invited Turrell to scale up his work at PS1, a new space for contemporary art in Long Island City, NY. Turrell obliged, using a jackhammer to drill a hole through four feet of concrete in the roof of the dilapidated former public school building. The skyscape took him more than a year to complete, during which time the artist lived in a tent pitched inside the structure. Entitled Meeting, it is now one of New York’s best-loved works of art, attracting thousands of visitors every year. Skyscapes have since become Turrell’s signature pieces. He has created more than eighty of them, in 26 countries around the world. During the 1980s and ‘90s, however, Turrell was frustrated by the limitations imposed on his work by the primitive lighting technology of the day. The concealed linear tungsten-filament tubes he used in his early installations were only capable of producing one color, a soft orange glow. You could vary their brightness, but that was it. The tubes were no match for the artist’s dreams of dynamic, full-spectrum illumination.

Back then it was possible to produce color using plastic gels to filter white lights. Since the Bicentennial in 1978, the upper floors of the Empire State Building had on special occasions been bathed in multi-colored light produced in this way. But the palette consisted of just a few, washed-out-looking hues. It took a team of maintenance workers up to six hours to install the gels, by hand, on the skyscraper’s 400-odd upward-facing floodlights. Changeovers from color to color could be automated, using diachroic filters driven by stepper motors. But moving parts raised maintenance issues. Control in such archaic mechanical systems was complicated: to achieve even simple effects it was necessary to employ a theatrical lighting professional. The other option for colored light was cold cathode, a relative of neon, a technology that originated in the late 1920s. In 1997 Turrell had used computer-controlled cold cathode tubes to bathe the exterior glass walls of a six-story gas utility building in Leipzig, Germany, with red, yellow, and blue light. (“Light should be a material with which we build,” Turrell declared.) Noble gas it might be, but neon was a nightmare to work with. The tubes were fragile and broke easily; the fixtures required high-voltage power supplies whose bulky transformers made them difficult (and expensive) to install and hard to conceal. Cold cathode was also notoriously tricky to dim below a certain point, making impracticable smooth transitions from light to dark and from one color to another.